Syphilis is a bacterial infection that generally spreads through sexual contact. The disease begins as a painless sore — typically on the genitals, rectum, or mouth. Syphilis spreads from one person to another through the skin or mucous membrane contact with these sores.

After the initial infection, the syphilis bacteria could remain inactive in the body for decades before becoming active again. Early syphilis could be cured, sometimes with a single shot (injection) of penicillin.

Without treatment, syphilis could severely damage the heart, brain, or other organs, and can be life-threatening. Syphilis could also be passed from a mother to an unborn child. 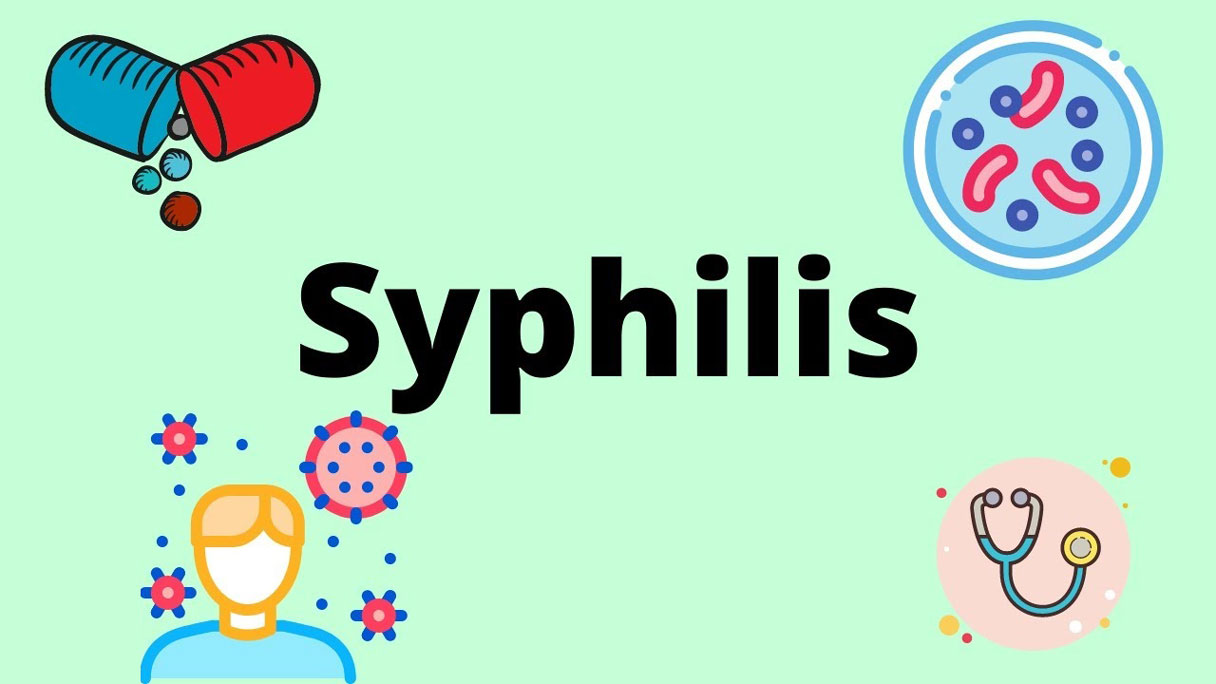 Syphilis develops in stages, and symptoms differ with each stage. But the stages might overlap, and symptoms do not always occur in the same order. You might be infected with syphilis without noticing any symptoms for years.

The first sign of syphilis is a small sore, known as a chancre. The sore shows up at the spot where the bacteria entered your body. While the majority of people infected with syphilis develop only one chancre, some people develop several of them.

The chancre generally develops about three weeks after exposure. Many people who have syphilis do not notice the chancre because it is usually painless, and it might be hidden within the vagina or rectum. The chancre will heal on its own within 3 or 6 weeks.

Within a few weeks of the original chancre healing, you may experience a rash that begins on your trunk but ultimately covers your entire body — even the palms of your hands and the soles or bottom of your feet.

This rash is usually not itchy and might be accompanied by wartlike sores in your mouth or genital area. Some people also suffer from hair loss, muscle aches, a fever, a sore throat, and swollen lymph nodes. These signs and symptoms might disappear within a few weeks or repeatedly come and go for as long as a year.

If you are not treated for syphilis, the disease moves from the secondary stage to the hidden (latent) stage, when you do not have symptoms. The latent stage could last for years. Signs and symptoms may never return, or the disease might progress to the third (tertiary) stage.

About 15 percent to 30 percent of people infected with syphilis who do not get treatment will develop complications known as tertiary syphilis. In the late stage, the disease might damage the brain, nerves, eyes, heart, blood vessels, liver, bones, and joints. These problems might occur many years after the original, untreated infection.

At any stage, syphilis could spread and, among other damage, cause damage to the brain and nervous system, and the eye.

Babies born to women who have syphilis could become infected through the placenta or during birth. Most newborns with congenital syphilis have no symptoms, however some experience a rash on the palms of their hands and the soles of their feet.

Later signs and symptoms might include deafness, teeth deformities, and saddle nose — where the bridge of the nose collapses.

However, babies born with syphilis can also be born too early, might die in the womb before birth, or can die after birth. 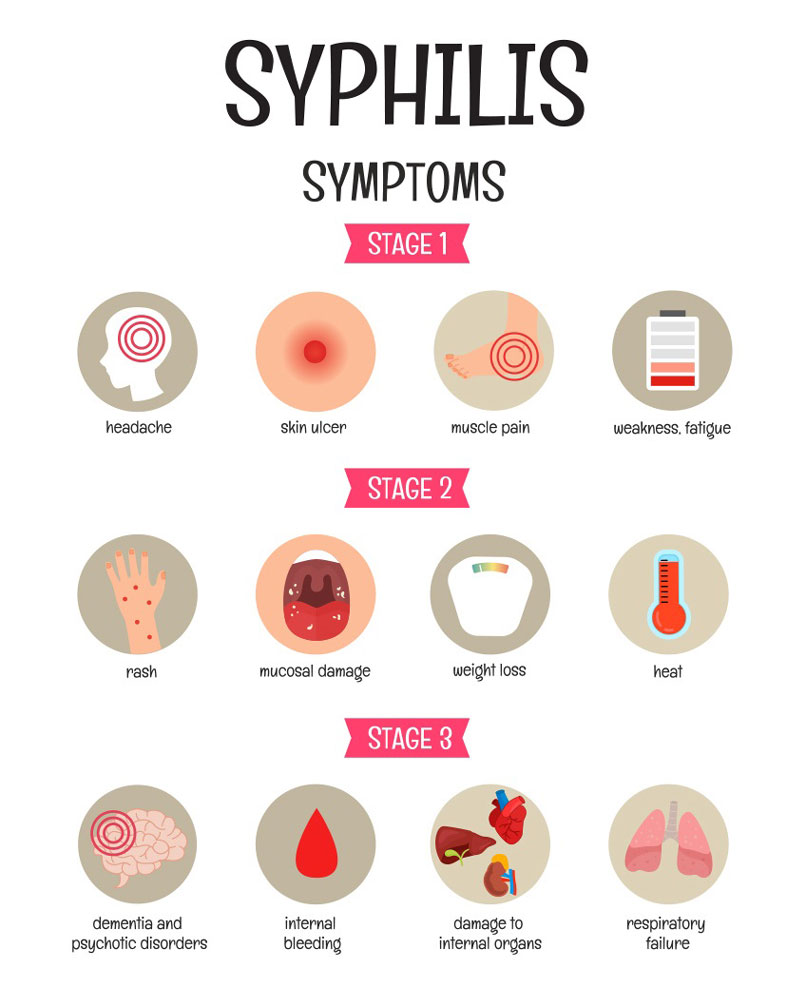 When should you see a doctor?

Call your doctor if you or your child experiences any unusual discharge, sore or rash — especially if it occurs in the groin area.

The cause of syphilis is a bacterium known as Treponema pallidum. The most common way syphilis is spread is through contact with an infected person's sore during sexual intercourse. The bacteria enter the body by minor cuts or abrasions in the skin or mucous membranes. Syphilis is contagious during its primary and secondary stages, and at times in the early latent period.

Less commonly, syphilis might spread through direct contact with an active lesion, like during kissing. It could also be passed from mothers to their babies during pregnancy or childbirth.

Syphilis cannot be spread through using the same toilet, bathtub, clothing, or eating utensils, or from doorknobs, swimming pools, or hot tubs.

Once healed, syphilis does not return on its own. However, you could become reinfected if you have contact with someone's syphilis sore.

You have an increased risk of acquiring syphilis if you:

Without treatment, syphilis could lead to damage throughout your body. Syphilis also increases the risk of HIV infection and could cause problems during pregnancy. Treatment can help prevent future damage but cannot repair or reverse the damage that has already occurred.

In the late stage of syphilis, bumps (gummas) could develop on the skin, bones, liver, or any other organ. Gummas generally disappear after treatment with antibiotics.

These might include bulging and swelling of the aorta — your body's major artery — and of other blood vessels. Syphilis might also damage heart valves.

Adults with sexually transmitted syphilis or other genital ulcers have an approximate two- to fivefold increased risk of contracting HIV. Syphilis sores could bleed easily, providing an easy way for HIV to enter the bloodstream during sexual activity.

If you are pregnant, you might pass syphilis to your unborn baby. Congenital syphilis considerably increases the risk of miscarriage, stillbirth, or your newborn's death within a few days after birth.

There isn’t any vaccine against syphilis. To help stop the spread of syphilis, follow these suggestions:

If tests show that you have syphilis, your sex partners — including current partners and any other partners you have had over the last three months to one year — need to be informed so that they could get tested. If they are infected, they could then be treated.

Official, confidential partner notification could help limit the spread of syphilis. The practice also steers those at risk toward counseling and the correct treatment. And since you could contract syphilis more than once, partner notification reduces your risk of getting reinfected.

People could be infected with syphilis and not know it. In light of the often-deadly effects syphilis could have on unborn children, health officials recommend that all pregnant women be screened for the disease.

Syphilis could be diagnosed by testing specimens of: 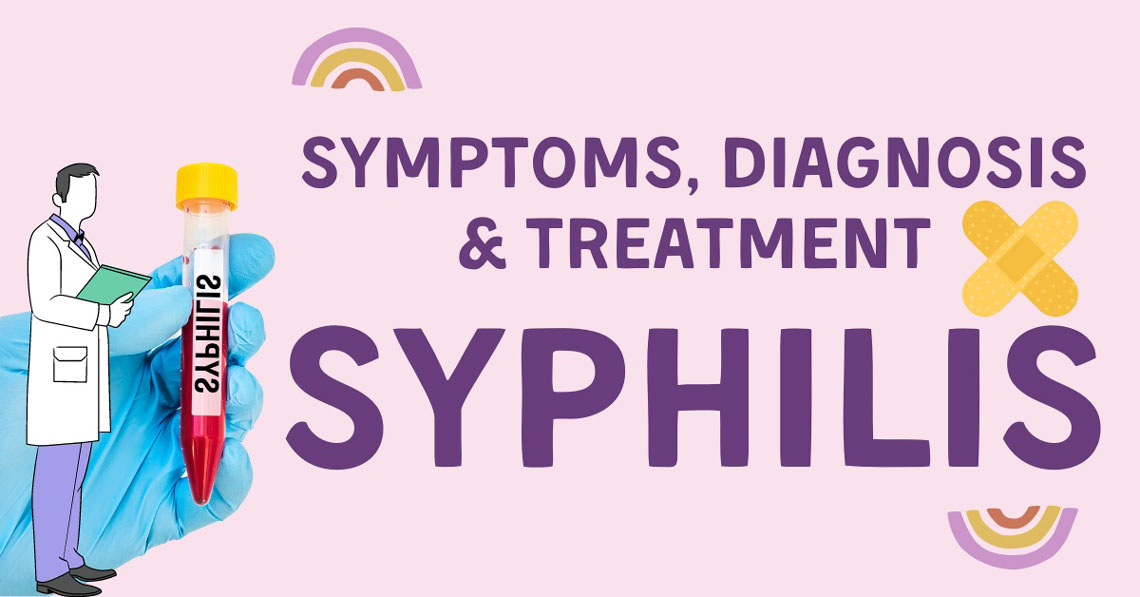 Through the Centers for Disease Control and Prevention, your local health department offers partner services, which will help you notify your sexual partners that they might be infected. Your partners could be tested and treated, limiting the spread of syphilis.

When diagnosed and treated in its early stages, syphilis is easy to heal. The preferred treatment at all stages is penicillin, an antibiotic medication that could kill the organism that causes syphilis. If you are allergic to penicillin, your doctor might suggest another antibiotic or recommend penicillin desensitization.

The recommended treatment for primary, secondary and early-stage latent syphilis — which refers to an infection within the last year — is a single injection of penicillin. If you have had syphilis for longer than a year, you might need additional doses.

Penicillin is the sole recommended treatment for pregnant women with syphilis. Women who are allergic to penicillin could undergo a desensitization process that may allow them to take penicillin.

Even if you are treated for syphilis during your pregnancy, your newborn child should be tested for congenital syphilis and if infected, receive antibiotic treatment.

The first day you receive treatment, you might experience what's known as the Jarisch-Herxheimer reaction. Signs and symptoms involve a fever, chills, nausea, achy pain, and a headache. This reaction usually does not last more than one day. 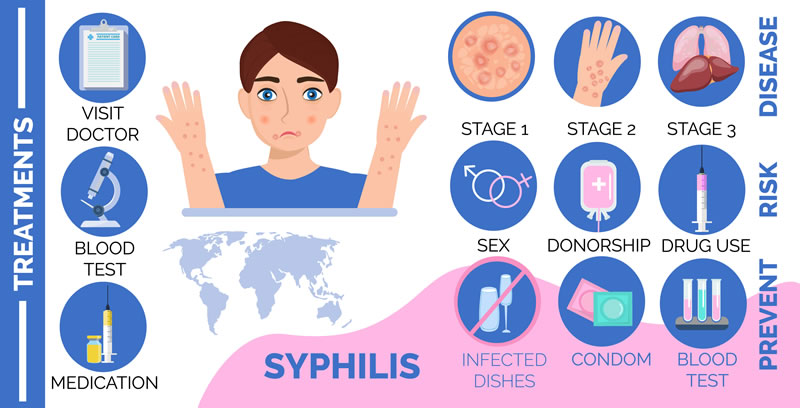 After you are treated for syphilis, your doctor may ask you:


If you or anyone you know is suffering from syphilis, our expert providers at Vegas Health will take care of your health and help you recover.