Gonorrhea is an infection caused by a sexually transmitted bacterium that infects both men and women. Gonorrhea most frequently affects the urethra, rectum, or throat. In females, gonorrhea could also infect the cervix.

Abstaining from sex, using a condom if you have sex, and being in a mutually monogamous relationship are the best ways to avoid sexually transmitted infections. 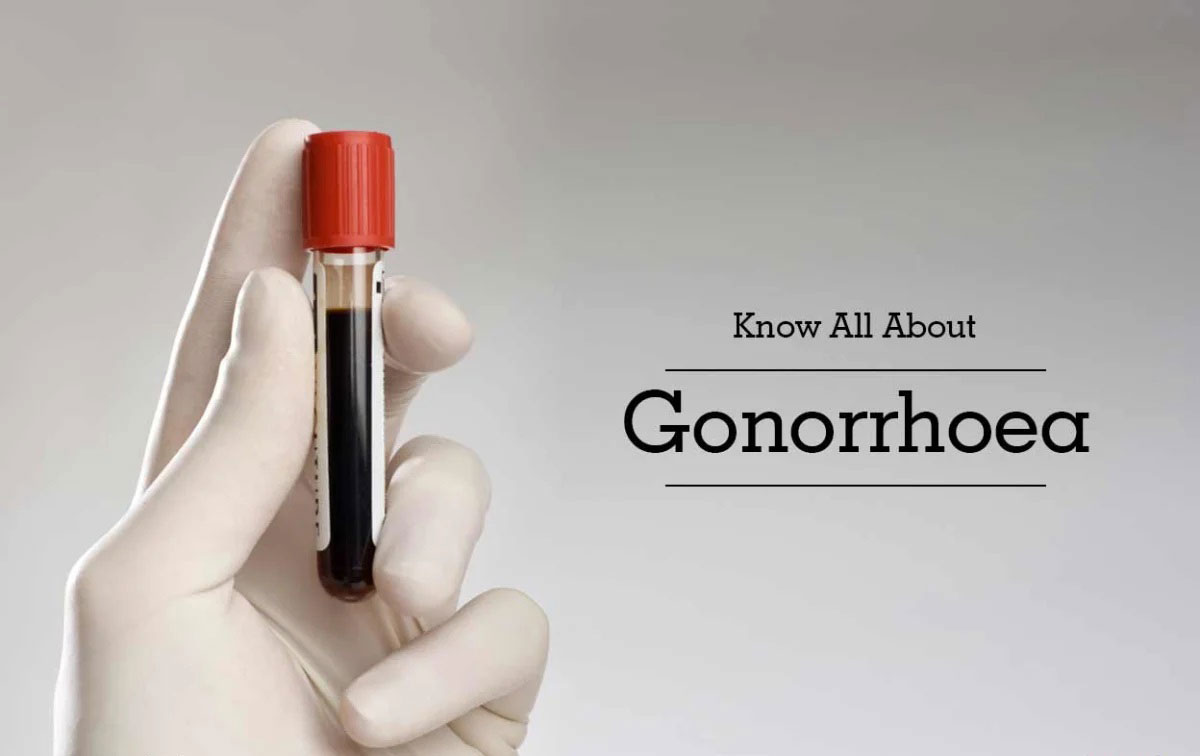 In many instances, gonorrhea infection causes no symptoms. Symptoms, however, could affect many sites in your body, but commonly appear in the genital tract.

Signs and symptoms of gonorrhea infection in men are:

Signs and symptoms of gonorrhea infection in women are:

Gonorrhea at other sites in the body

Gonorrhea could also affect these parts of the body:

When should you see your doctor?

Make an appointment with your doctor if you notice any troubling signs or symptoms, like a burning sensation when you urinate or a pus-like discharge from your penis, vagina, or rectum.

Also, schedule an appointment with your doctor if your partner has been diagnosed with gonorrhea. You might not experience signs or symptoms that prompt you to seek medical attention. But without treatment, you could reinfect your partner even after he or she has been treated for gonorrhea.

Sexually active women under the age of 25 and men who have sex with men are at increased risk of getting gonorrhea. 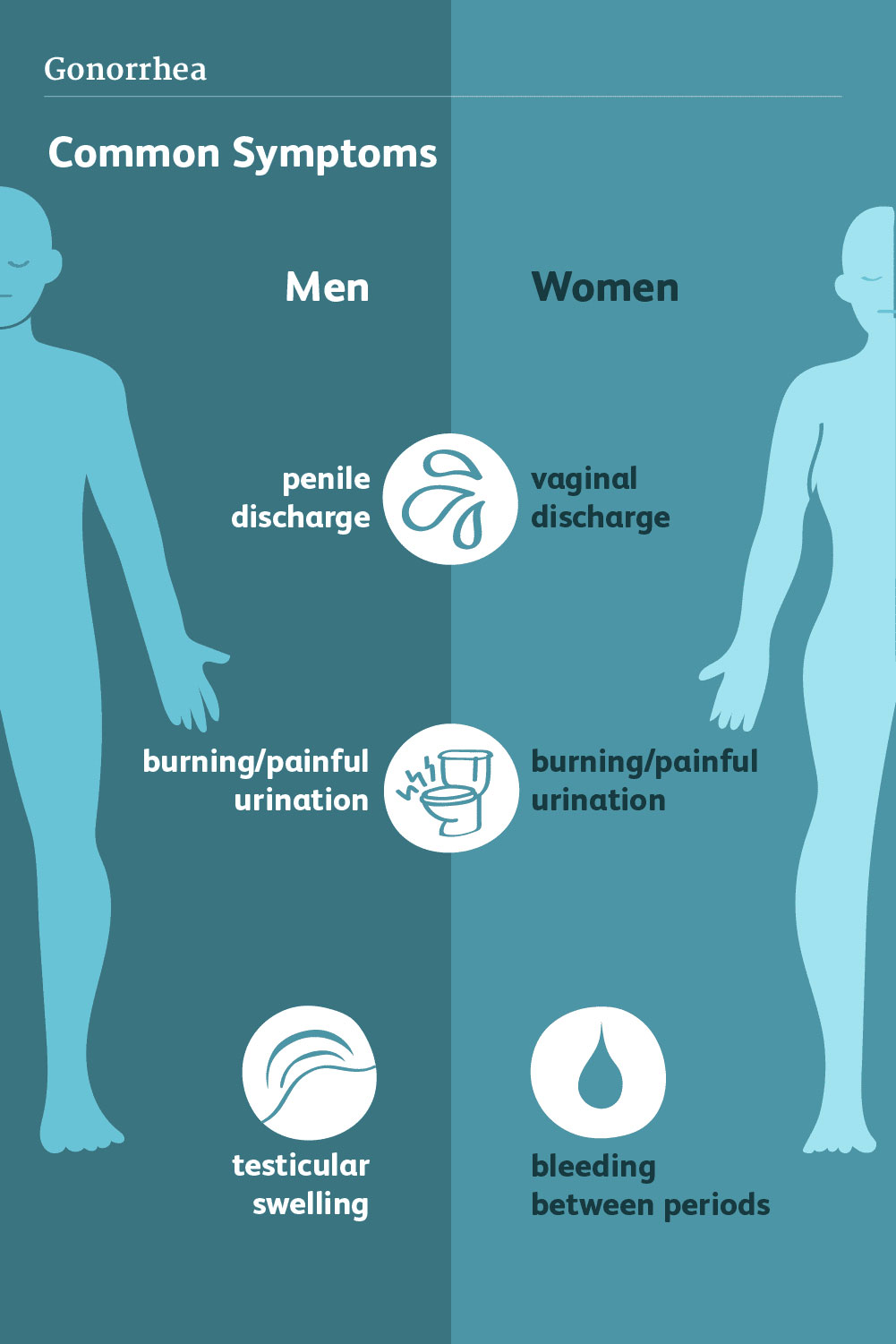 Other factors that could increase your risk are:

Untreated gonorrhea could lead to major complications, such as: 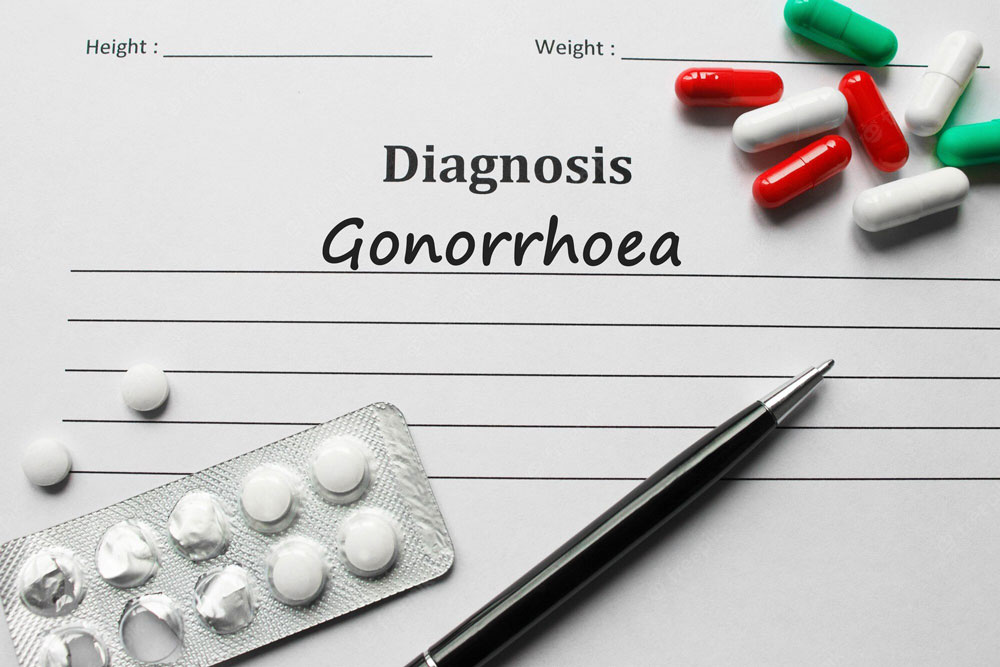 To lower your gonorrhea risk:


To avoid getting gonorrhea again, do not have sex until after you and your sex partner have completed treatment and after symptoms are gone.

To determine whether you have gonorrhea, your doctor will evaluate a sample of cells. Samples could be collected by:


For females, home test kits are available for gonorrhea. They include vaginal swabs for self-testing that are sent to a specified laboratory for testing. You could choose to be notified by email or text message when your results are ready. You could view your results online or receive them by calling a toll-free hotline.


Testing for other sexually transmitted infections

Your doctor might recommend tests for other sexually transmitted infections. Gonorrhea increases your risk of these infections, especially chlamydia, which often accompanies gonorrhea.

Adults with gonorrhea get treated with antibiotics. Because of the emerging strains of drug-resistant Neisseria gonorrhoeae, the Centers for Disease Control and Prevention recommends that uncomplicated gonorrhea be treated with the antibiotic ceftriaxone — given as an injection — with oral azithromycin (Zithromax).

If you are allergic to cephalosporin antibiotics, like ceftriaxone, you might be given oral gemifloxacin (Factive) or injectable gentamicin and oral azithromycin.

Your partner also should go through testing and treatment for gonorrhea, even though he or she has no signs or symptoms. Your partner is given the same treatment as you. Even if you have been treated for gonorrhea, a partner who is not treated can pass it to you again.

Babies born to mothers with gonorrhea who develop the infection could be treated with antibiotics.


If you or anyone you know is suffering from gonorrhea, our expert providers at Vegas Health will take care of your health and help you recover. Call (702)-551-5212 to book an appointment with our specialists.